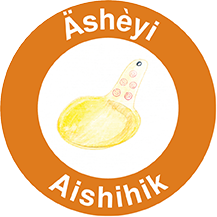 Äsheyi (Aishihik) settlement is located at the north end of Män Shäw (big lake), also known as Äsheyi Män (Aishihik Lake). The village’s name is Tlingit in origin and refers to its location at “’the head of the lake,” a good place to catch fish.

During World War II, the army constructed a road north from the Alaska Highway and built an airport at Äsheyi, connecting the village to the “outside.” In the late 1960s, the federal government moved the Äsheyi kwädan (families) to Dak­wäkäda (Haines Junction). Only a few years later, a hydroelectric dam was constructed at the south end of the big lake and the changing water levels severely impacted the lakeshore and fishery. Äsheyi has been revitalized in recent years as families come here to reconnect to the land and their history.