Together today for our children tomorrow 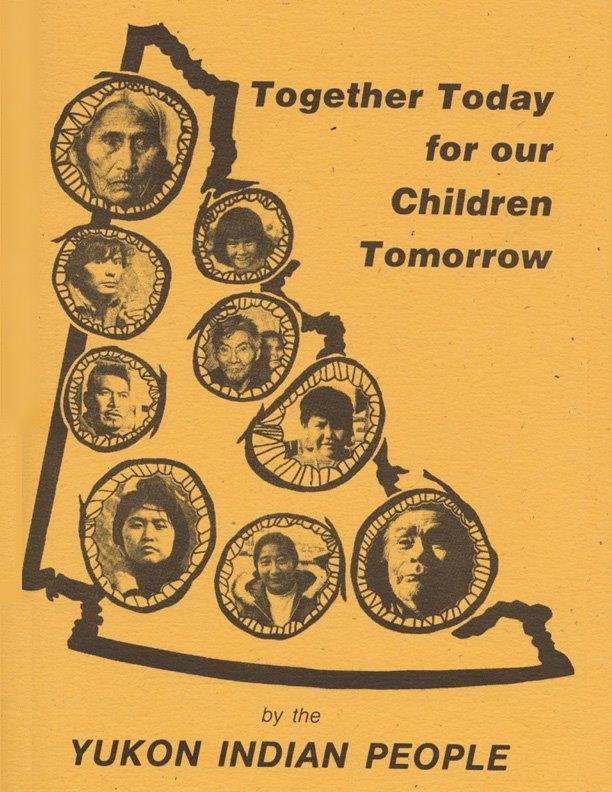 In 1993, after more than 20 years of negotiations, CAFN’s rights to the Yukon portion of its traditional lands and resources were finally confirmed with the signing of the Champagne and Aishihik First Nations Final Agreement between CAFN, the Government of Canada and the Government of Yukon.

Land claim negotiations concerning the portion of CAFN territory within BC are as yet incomplete, but in the interim, an innovative and precedent setting agreement between the BC government and CAFN has been reached which provides for joint management authority of the newly created Tatshenshini-Alsek Park.

Elijah organized the Yukon Native Brotherhood and, in 1973, he presented Together Today for our Children Tomorrow, a position paper on the Yukon comprehensive claim, to then Prime Minister Pierre Elliot Trudeau.

CAFN was one of the first four Yukon First Nations to conclude their final agreements. CAFN’s Dave Joe was the Chief Negotiator for the Council for Yukon Indians (now the Council of Yukon First Nations) was instrumental in completing the Yukon Umbrella Final Agreement. The late Harry Allen and Dorothy Wabisca, along with Chief Paul Birckel, were also key players in the successful negotiation of these groundbreaking agreements.

CAFN’s Land Claim Agreement provides for the ownership of some 2,427 square kilometers of land. It also continues to provide guaranteed access to fish and wildlife resources. Most importantly, the agreement establishes the CAFN government as co-managers of all natural and cultural resources in its traditional territory.

CAFN is now a full partner on the Kluane National Park Management Board, the Alsek Renewable Resources Council and has representation on numerous other regional and territorial boards that make recommendations on heritage, educational, environmental and economic issues.

In addition, the self-government agreement provides CAFN with the power to enact laws on a wide range of matters affecting the rights of its citizens. On September 17, 1998 the Champagne and Aishihik First Nations made history by passing three acts: the Income Tax Act, Fish and Wildlife Act, and the Traditional Pursuits Act. These acts became effective on January 1, 1999.

A variety of municipal services, (housing, roads, water and sewer) as well as social services (health, nutrition, employment and training) are fully administered by the First Nations’ government. The Department of Lands and Resources, which also includes Heritage and Economic Development, manages CAFN’s traditional lands and integrates education and training of its citizens.

CAFN has undergone radical change in the last 100 years. Not long ago, the Southern Tutchone people of this region lived as part of the land. Today, they are working on the establishment of their own government and CAFN is becoming the steward of its homeland as it builds a sustainable economy.