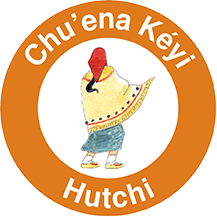 Chu’ena Kéyi, meaning “type of whitefish found in the lake + village” is a traditional settlement situated on Chu’ena Män (middle Hutchi Lake). During the 19th century, Chu’ena Kéyi was a centre for nt’akedaye (trade). The Chilkat Tlingit from Klukwan brought European trade goods here to trade for nena dhü (furs) trapped by our people. The village’s Tlingit name, Hutchi, refers to this being the “last stop” made by traders before they returned home to the coast with bundles of furs.

In kwädąy (long ago) times, Chu’ena Kéyi was a meeting place. Every few years our people gathered here to discuss issues of concern, such as the distribution and condition of the animals. The gatherings provided an oppor­tunity to reconnect with family and other Dän (First Nation people) from across the southern Yukon.